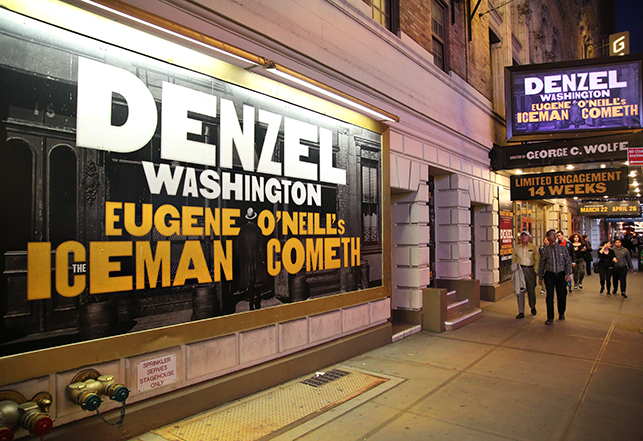 This past weekend, I celebrated my 24th birthday.

I got to spend it with friends and family which is all I could ask for. But I also got to spend part of it (technically) with someone who I’ve looked up to and admired for as long as I could remember – Denzel Washington. He is currently starring on Broadway in Eugene O’Neill’s epic drama “The Iceman Cometh.” He plays the main character Hickey, one of the greatest and most complex characters in the history of American theater. The emotional journey the characters go on throughout the play is treacherous and making O’Neill’s poetic text sound genuine is no easy task. But on top of all that, the production is almost 4 hours long. So for my birthday I got see one of the greatest actors in history in one of the greatest plays in history for 4 hours, and I could not wait.

I had never seen Denzel Washington on stage before. I had been seeing him in movies my whole life, same as everybody. The first movie with Denzel Washington I had ever seen was “Remember the Titans” and still to this day if it is on TV and I stumble upon it, I have to finish it. I remember seeing him in that movie and feeling scared of him as his players did, and I felt as motivated as they did by what he did for them. I remember even then looking up to Denzel Washington as someone I admired and wanted to be like – and of all the things in my life that have changed that ain’t one of them. From there it was “Training Day”, “Flight”, “Glory”, “The Hurricane”, “Philadelphia.” I could spend this whole blog writing about great Denzel Washington movies, but that’s not the point. The point is I had loved this man’s work for as long as I could remember, and now… now I got to seem him in the flesh.

My mom had seen Denzel in his last two Broadway productions; “Fences” by August Wilson and “A Raisin in the Sun” by Lorraine Hansberry. She told me that seeing him on stage is an experience that is hard to describe. The voice, the smile, and the swagger that he’s become famous for in his films is even more palpable on stage as it is happening right in front of your very eyes. I am happy to report that the build up to seeing him perform would not disappoint.

I thankfully did not dig too deep into the story of “The Iceman Cometh.” I was familiar with Eugene O’Neill’s work before, I had seen a production of “A Long Day’s Journey into Night” starring Jessica Lange, Gabriel Byrne, and Michael Shannon. That play had a similar run time of 3 hours and 45 minutes and you really felt you had spent a long, exhausting day with this family.

Without giving too much away, it is about a group of drunkards in New York in 1912 who are all living on, besides borrowed time, false hopes. These “pipe dreams”, as Washington’s character refers to them as, are the only thing keeping these people alive. Well it’s mainly alcohol and pursuit for the next party that are keeping these people alive, but at the end of each night, they talk about making something better of themselves.

One character is known as “Jimmy Tomorrow” because of how often he proclaims he will get his old job back and start his life again…tomorrow. Hickey, played by Washington, is a mysterious and beloved figure who comes to Harry Hope’s bar, where the play takes place throughout, once or twice a year. When he shows up, it’s nothing but good times and laughs for everybody.

So when he arrives about 45 minutes into Act I, the cast of characters are expecting more of the same. But Hickey, now recently sober, is telling everybody to “let go of the pipe dreams.” How the only way they’ll be better is if they face their fears and actually try to live out their dreams.

However, as the play unfolds, you see just how an addiction and mental health issues can consume a person’s existence.

Nothing terrifies these characters more than going out into the world and being ridiculed and feeling like failures. At least in Harry Hope’s bar they are treated as equal and everyone and, from what it seems, have love for one another in their own way.

It is a brilliant play performed by an extraordinary cast. I will get into Denzel’s performance in a minute but I wanted to recognize some standouts. The biggest standout performance other than Denzel’s, to me, was David Morse as Larry Slade.

Now, David Morse is probably not a name that a lot of people know, but he’s one of those guys you’ve seen in a bunch of shit.

He was the memorable villain in “Disturbia” with Shia Labeouf. He’s always played a villain, or a cop, or a soldier, or a doctor. So I’ve never seen him in such a deep and complex role like this before, but he knocked it out of the park.

He dealt with a lot of difficult dialogue and is on stage for a majority of the play, even more than Denzel. He was incredible as well as Colm Meaney playing Harry Hope, a bar owner that hasn’t left the bar and gone outside since his wife died 20 years ago. He’s in my opinion the saddest character in this play because he is the one enabling and homing these sad people into his bar.

Thomas Michael Hammond as Jimmy Tomorrow, Tammy Blanchard as Cora, Neal Huff as Willie Oban, Austin Butler as Don Parritt, the entire case was extraordinary. For four hours not one of them relented, they stayed in the story the entire time and had your full attention. And then Denzel Washington steps on stage, and all you watch is him.

I knew Denzel Washington was a great actor – everybody knows that. It’s a simple fact. But my mother was right – seeing him live is something that is hard to describe. He is the most natural performer I’ve ever seen. He dances onto stage in Act I and from that moment you’re hooked.

Something I learned in this play that maybe Washington’s greatest attribute is his ability to tell a story. At the end of the play, Denzel grabs a chair, puts it in the middle of the stage up against the edge, and he tells a story. Now I can’t go into the details of the story because of the importance to the plot of the story. It’s the most pivotal moment in the play and it requires a great actor to make you want to listen to every single word of it.

And that’s exactly what he does.

For what could have been 20 or even 30 minutes, everyone, cast and audience, is hanging on every word that Denzel speaks. There were times where there was absolute silence in the theater, and it was remarkable. He tells the story the only way Denzel could, and when his character leaves the stage for the last time, he was met with the same thing he was met when he arrived; applause.

When the play ended, me along with the rest of the audience could not have clapped faster or louder. We were in awe of what we just watched and we didn’t know how to thank the cast enough. After my mom and I left the theater, we tried waiting to see if Denzel or anyone from the cast would come out. Some ensemble members came out and we said congratulations on the performance. We had hoped that at least we could see David Morse and tell him how wonderful we thought he was.

Unfortunately, security told everyone the cast had left through a different part of the building and would not be coming out to sign autographs. I can’t say I blame them, they just gave themselves up for our entertainment for the last 4 hours. The last thing I’d probably do is go out and see people. I’d probably want to sleep or get a drink, which coincidentally was the first thing I did after seeing the show.

But I really could not thank them enough for putting on such an incredible show. The same as I can’t thank my mom enough for getting the tickets.

And lastly, I can’t thank Denzel Washington enough for yet another brilliant performance, and for giving me the experience of a lifetime.